I’ve worked out a way using InkScape and Bullzip PDF to split the plans for the Flitetest Monster Spitfire into Arch D (36″ x 24″) size sheets so I can print them on the works Drum plotter.  I thought I’d share it with the community.

For some reason my Raspberry Pi has stopped working at the field.  Everything is fine on the bench, but as soon as it’s strapped to the the plane, the Laptop can’t connect. Without a monitor and keyboard at the field, I can’t diagnose the problem.

I have two thoughts on the matter.

1. The case and board are distorting due to the rubber bands, preventing the SD card from getting a full electrical connection.  I’ve made a platform for it to sit on which should hold everything flat.

2. Although the Pi is powered from a 3 Amp BEC, there is an internal limit to how much current it can supply to peripherals.  I have added the external amplified antenna to the Ultimate GPS Breakout and it maybe the extra current draw is causing problems.

To remedy this I have modified the wiring harness so that it can be powered directly.

While on the subject of the amplified antenna, I have also shortened the cable from its original 5 metres to something more manageable and removed the heavy permanent magnet from the housing.

Hopefully these measures should get things working again.

Only a couple of days after my first flight, we had another sunny day, so I took the opportunity to go flying.  I hadn’t changed the setup from the first flight, but wanted to try pushing the range out further.  I found after the flight that the GPS had never achieved a lock and no track was recorded.  Reviewing the on-board camera footage, I found some clear landmarks that could be used to calculate a new maximum range of 350 metres.  This is about as far as I can fly line of sight with this airframe.

While the flight was performed line of sight, I did manage a couple of glances at the laptop screen with the headcam to show the stream was still running.

The computer and aircraft setup was the same as for the first flight.  I pointed the camera down a bit further so more ground and less sky was recorded.  Unfortunately it also meant more propeller was recorded.  I did move the rudder push rod in one hole on the servo to reduce its authority under power.  My old Futaba Attack 4 channel radio doesn’t have dual rates.

While still blustery, the wind was not as strong as for the first flight.  I was able to push the distance out further and a couple of quick glances at the laptop showed the stream was still running.  Towards the end of the flight, I tried a couple of loops and then flying through the (bigger) gaps in the trees.  You can’t hear it on the video, but I did clip a couple of small branches.

After the flight it was disappointing to find that the gps had never got a lock and no track had been recorded. Luckily, the on-board camera had recorded two very distinctive landmarks during a turn which could be used to triangulate it’s position.

The first was a hedge running south.

The second was the line of trees next to the playing fields. 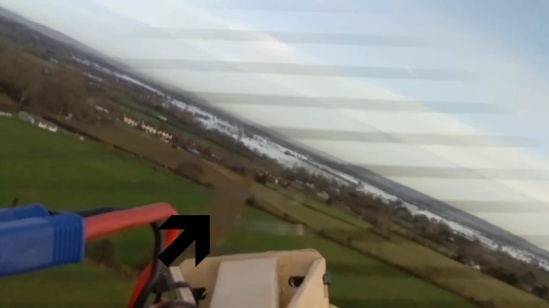 Locating these landmarks in Google Earth allowed me to measure the maximum range as 350 metres.

This distance is about my limit for line of sight flying with this airframe.

While editing the video I became aware that the Raspberry Pi camera and the GoPro headcam were running at slightly different rates.  I had synced the start of the two videos streams at the point the propeller started turning to within one frame.  After the six minute flight the Raspberry Pi was about one second behind the GoPro.  You can see this as the plane passes the last tree.

While not a big deal it does make it a pain to edit the two streams in parallel.

While not a totally successful flight, I was able to establish a new maximum streaming range of 350 metres.  The next step is to work out a way to record the stream at the laptop end.